It wasn’t until our flight to New York City that the reality of what she was embarking on finally set in for EmBen.   Midway across the country, thousands of feet in the air, she looked over at me.  Fear had whitewashed her face.   She began to cry, and asked, “Will I be okay?”

Since her diagnosis, EmBen had been hell-bent on cutting the cancer out of her body.  Despite every oncologist and surgeon stating otherwise, she refused to acknowledge that a Stage IV diagnosis restricted her from surgery.   It was her plan and she knew it would be a reality.

When Dr. Flores presented the opportunity for surgery in New York City, she jumped all over it.  EmBen was ecstatic.  She flooded him with questions about how quickly she could have the surgery and any potential roadblocks.  Not once did she ask him a question about surgical success rates, past patients, or life limitations with one lung.  She had blinders on and she was on a straight sprint for survival.

For the next few weeks, my mother and I prepared by spending countless hours researching the internet about complete lung removal surgeries and recovery.  Meanwhile, EmBen planned what tourist attractions she wanted to see while in NYC.  She had this aura of confidence and trust.   It was highly impressive, yet almost inhuman.

Emily had vowed from the first day of diagnosis to do whatever it took to survive.   The success of the upcoming surgery in preventing cancer recurrence was anything but guaranteed, but it provided an opportunity for life, and with that, EmBen was committed.  It was the emotional commitment to mutilate her body and forever change the way she lived her life that gave her greater pause.  In that, she finally found fear.   I wanted to relieve all of her doubt, but I too didn’t know what to truly expect.  So, I just held her.

By the time we started our descent, EmBen had regained her buoyancy and was prepared for the “new normal,” a life that was perhaps missing past action and movement, but replaced with more appreciation and love.

The months of recovery, as documented on this blog, were incredibly challenging, filled with pain and fatigue.  Slowly, she adjusted.  Yesterday, though, was a significant day.

After I returned home from work, EmBen was recounting how she had exercised for 45 minutes, then went to the grocery store, then the post office, and finally Target before returning home.  As she lay there motionless on the couch, preparing for a nap, she looked at me and said, “Miles, I feel normal.” 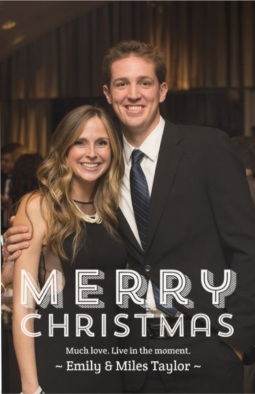 Sure, in reality, it may be a new normal.  But those words hit me deep.  I’m just so happy for that fearful EmBen on the plane nearly two years ago.  I just want to go hold her once again and tell her to have no fear.  She is embarking on the greatest decision of her life.

Thank all of you for your support and love in 2014.  EmBen and I are so grateful and excited for 2015.    May we all celebrate this year.

Much love.  Live in the Moment.