Michele and Rich Taylor are back in Los Angles to help Emily and Miles during Emily’s second round of chemotherapy.  The following anecdote is from Friday (8/17) as told by Michele..

The last couple of days have been rough on Emily.  The doctors cautioned them to stay on top of the nausea this round, so Miles started the anti-nausea meds earlier and scheduled them around the clock.

As the days progressed, Emily was sleeping 19 hours/day and was not very coherent when she was awake.  But we weren’t worried, figuring her body was doing its chemo thing.  So when Rich and Miles joined the guys for tennis Thursday night, I had no concerns about staying with her.

I had just started reading when Emily got up the first time and appeared to be having hallucinations.  She described them as “bad nightmares while awake” and decided to go back to sleep.  An hour later, she was back up, but when she tried sitting upright in a chair, she couldn’t, and headed back to bed.  I was pretty sure she was overmedicated and planned to suggest they cut back on the meds. 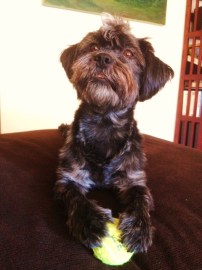 Still, I was not too worried.  That is until Ginny came bounding into my room, clearly agitated and barking.  I couldn’t quiet her and she kept running back and forth between my bed and the hallway.

Now, I grew up on Lassie, and when Lassie came home barking, it was because Timmy had fallen into a well.  So I immediately concluded that Emily was in distress and Ginny, being most in tune with her, was alerting me.  I spent the next half hour tip-toeing into Emily’s room, checking on her breathing and pulse count.  She seemed fine, but Ginny didn’t let up and I started getting worried.

When Miles came home, I told him I thought we were over dosing Emily on the anti-nausea meds. 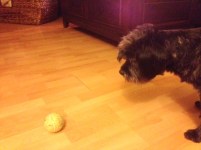 He heard it that Emily had OD’ed while he was gone.   He was running around frantic, pulling at his hair, and then hooking her up to a blood pressure machine.  When Emily’s stats came back perfectly normal, he yelled, “Why the hell did you think there was something wrong with her?”  I told him about Ginny barking at me and running into the hallway over and over again.  He said, “Are you kidding me?  That’s what she does when her ball rolls under the sofa and she can’t get to it.”

Well, that would have been nice to know…

Weekend Update:  The old Emily is back 🙂